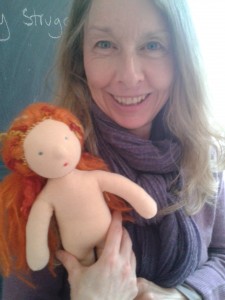 Participants were asked to make a doll in their own likeness

The last Oasis group which finished its third Pathway at Easter 2013, concluded with a very special project: Participants were asked to make a doll in their own likeness!

The idea for this arose out of the study of a Russian Fairy Tale, called “Vasilisa the Beautiful“. In this story Vasilisa is given a doll by her mother just before she dies. She tells her that it has magic powers and will always protect her provided that she takes good care of her doll, talks to her and feeds her.

After her mother’s death Vasilisa has to endure cruel treatment by her stepmother who eventually sends her to the witch Baba Yaga to fetch fire – a most dangerous undertaking. It is her doll that keeps Vasilisa safe. The doll fulfils the impossible tasks set by Baba Yaga, such as sorting bagfuls of lentils and wheat grain in a very short space of time.

The doll is a powerful image of our own hidden self that is full of wisdom and able to face any task that life throws at us. Just as in the story however, we have to learn to nurture this part of ourselves, so we can access it in times of need. 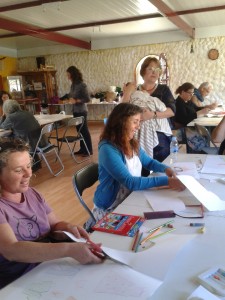 The women in the group embarked on this project with some trepidation, as not everyone felt they had the skill to sew a doll

The women in the group embarked on this project with some trepidation, as not everyone felt they had the skill to sew a doll. We decided that if we helped each other, with various people offering different skills, we should manage! And we did. It was a tremendous experience of joy to see them come to life, once we had created facial expressions and given the dolls their hair do, and to see them express some hidden parts of ourselves very powerfully! Many of the women had not played with dolls as children, others had, but to relate to them now as adults was a totally new experience for us all! We made these dolls for ourselves, not as presents for anybody else.

One woman found the courage to make profound changes in her life by embarking on a journey to do volunteer work abroad in a war torn part of the world. She told me that her doll will come with her! This is her relationship to her doll in her own words:

“We all think of children having dolls, well, if they are girls at least. But what about adults, surely not?

Well, as part of the Oasis group I was delighted to have the opportunity to make, stitch, stuff and dress my own doll. This was done as part of the group, with people helping out and chipping in to make sure the belly button was just right, or that the hair colour reflected the individual. For this was my doll, my own creation, my own persona, my own soul.
A doll can contribute to change in many ways, it’s not just the making of a part of yourself, but the being with the doll, taking care of the doll as you would take care of yourself, the part of you, you don’t often nourish or explore.

With this doll you can explore dreams, ideals, sisterhood, childhood and nurturing. It’s all up to you and me, the relationship between myself and my doll, which has been at times happy, cheerful and full of promise, at other times thinking of times lost, tearful and seeking comfort.
My very own doll has made me connect more deeply with myself, it’s a little piece of magic.
Perhaps yours can do the same?”

“I found the journey of creating my inner soul in the form of a doll incredibly moving. For each stitch needed to create my doll, I felt a stitch being removed from my inner scars. It has been a wonderfully spiritual experience and a great privilege to share this within a wonderful group at Oasis.”

Pauline writes of her experience:

We often struggle to take care of ourselves in an inner and outer way. Although we mean to, and long to, there often seems to be something that prevents us from making a change. Through the busyness of life and its many distractions we often forget that we can experience life with more meaning. When we begin to listen to ourselves in a more meaningful way, the awareness of what is precious, intact and healthy begins to grow in us. 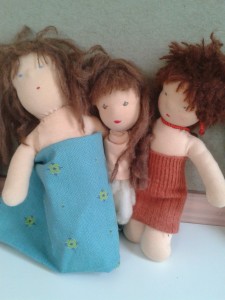 Over the aeons of time, the image of the doll represents this part of ourselves that has its own innate wisdom

Over the aeons of time, the image of the doll represents this part of ourselves that has its own innate wisdom. It waits for us to make a connection. There are many different types of dolls that express different qualities in different cultures.

The actual journey of making a doll, seeing it evolve, and giving it a name is a powerful way of accessing the deeper parts of ourselves that often remain hidden. Transferring inner feelings from inside to outside of ourselves and having a dialogue with them encourage a new way of being, encouraging growth and change.

Clarissa Pinkola Estes writes in ‘Women Who Run with the Wolves‘:
“Dolls are one of the symbolic treasures of the instinctual nature. For centuries humans have felt that dolls emanate both a holiness and mana – an awesome and compelling prescience which acts upon persons, changing them spiritually. Dolls are believed to be infused with life by their makers. They are used as markers of authority and talismans to remind one of one’s own power”. 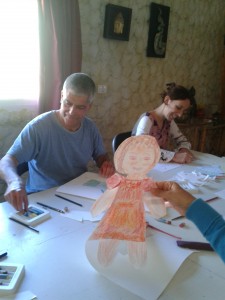 I was moved to see how the participants entered with great enthusiasm into the project, including the two men!

Shortly after this pathway was completed I was invited to give an Oasis workshop to health care professionals, therapists and students in Gran Canaria, Spain during the weekend before Easter. What a long way to go for such a short time! Moreover, I so much wanted to convey the experience of doll making we had just completed, but how to do this in over just two days? Well, I thought, why not make paper dolls? So we did! I first told the fairy tale of Vasilisa the Beautiful and gave some background to the metaphors and symbolism in the story as well as relating what had actually happened in this process.

Again I was moved to see how the participants entered with great enthusiasm into the project, including the two men!
-Karin Jarman 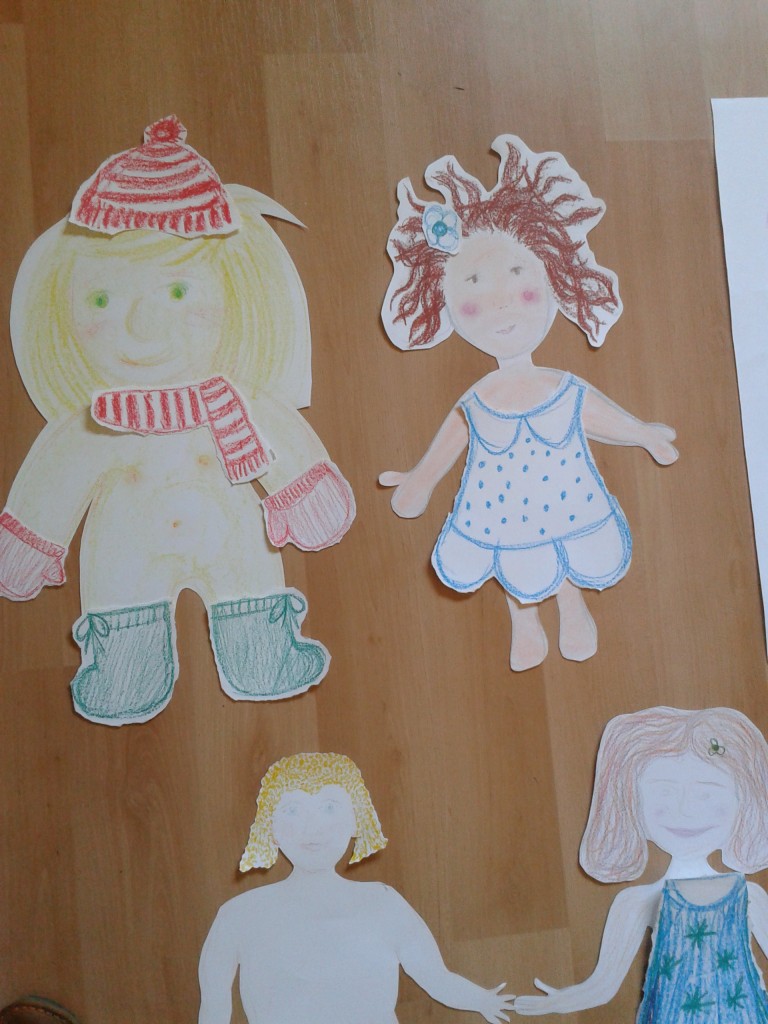 Due to time restrictions, we repeated the exercise with the group in Gran Canaria by creating paper dolls instead

I still have the same challenges in my life… I have just totally rewritten the way I regard them. I feel I am very much still learning though…

‘Oasis’ is a very appropriate name, because it really is a little oasis. Over the weeks we have been given the opportunity and space to pause, take a breath and begin the journey to nurse ourselves back to life a bit

How have I experienced Oasis? It’s very individual, each one of us in the group has gained new things and even though we have shared a common experience, what we can take with us is different and unique.

For me, l started not really knowing what to expect, what was needed from me and what I would gain from the journey. It has been surprising, delightful, painful and funny -it has fed my imagination and given me wings.

The ground rules of timekeeping, not interrupting, structure and routine are reliably upheld.

The Oasis content has worked on a very deep level throughout my life. It isn’t something I just do on Monday mornings.

Oasis has provided support through difficult times and has in equal measure enlightened my soul space.

As time progresses, I am beginning to feel real results. I cry much less. Physically, I feel a bit better. I feel less despairing. I can see a future for myself. I feel more in control of my situation. I can speak my truth with more courage and clarity.

Where the journey ends I do not know yet, but I do glimpse what might be possible and what to take with me.

Oasis is a unique experience a chance to get to know myself better and how I interact with the world, it is a place where my inner world was allowed to grow and develop, blossom into the person that was always there but is now me.

Karin and Pauline are prepared to take you to the edge of your cliff, hold you by the hand while you peer over to the depths, and are there to comfort and debrief you on your return. Their facilitation is rigorous, alert and thorough